In 2009 JJ Abrams and his Bad Robot team  revived the Star Trek franchise.Coming four years after, an eternity for that kind of franchise movie, the follow-up was eagerly expected and now the verdict is out : it’s a brilliant success!

Star Trek Into Darkness starts in the middle of a chase with a tribute from JJ Abrams to his master Steven Spielberg (« Raiders of the Lost Ark » is not far behind).That  relentless  pace  breaks rarely during the two hours and ten minutes of the movie! From here on its a succession of  action pieces each with their own cliffhangers. That accumulation of disasters may be tedious to some but I felt an exhilaration watching it nearly getting up from my chair numerous times. Despite its title Star Trek Into Darkness, although, the stakes are high is not a dark film and retains the humor of its predecessor.

Even as a sequel it  does not require viewers to have seen the first movie, it still rewards fans by  continuing character development from the previous installment. The Trekkies  (or « Trekkers ») are not forgotten as references to the original series and movies abound  some moments will get their blood pumping. i think though they will appreciate the effort to preserve the spirit of  Gene Roddenberry in the resolution of the film’s conflicts.

The visual world of the film is consistent throughout  on an incredible scale : sets and special effects are full of details and reach a level of excellence (mention to the London and San Francisco of the 23rd century shown in broad daylight). Into Darkness marks for me the best 3D conversion to date for the first time i recommend to see the in this format. 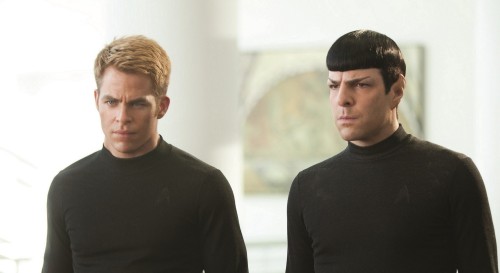 The cast of  the first movie is back all very comfortable in their roles : Zachary « Spock » Quinto and Chris « Kirk » Pine have both interesting characters arc , although it’s their second adventure the characters are still « in training ».Even if this entry is very Kirk-Spock centric other crew members  have an important role  as Uhura (Zoe Saldana) and Scotty (Simon Pegg). Sci-fi fans will be pleased to find Peter « Robocop » Weller  back in a major role.

But the main attraction of the film is its bad guy « John Harrison » played by Benedict Cumberbatch (BBC’s Sherlock TV series) whose charisma is a special effect onto itself.He brings his piercing gaze and deep voice to a character who is a threat both physical and intellectual to the crew of the Enterprise. It will stand as one of the great bad guys in the franchise .

Star Trek Into Darkness is a film that captures the essence of the summer blockbuster, hyper-efficient near-perfect, I give it a 9 out of 10!