The Conjuring – the season of the witch [Advanced Review] [English] 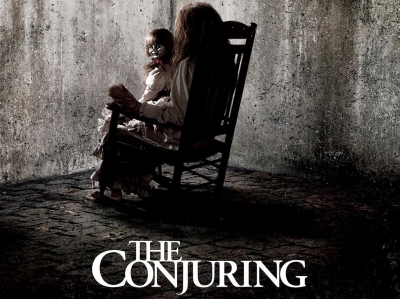 The director of Saw and Insidious takes on the the true story of Ed and Lorraine Warren , world renowned paranormal investigators, who were called to help a family terrorized by a dark presence in a secluded farmhouse.What’s the verdict

The screenplay for The Conjuring attempts a synthesis of haunted house concepts ranging from films like The Haunting to the Amityville Horror.From Robert Wise’s classic the team of paranormal investigator with their equipment helped by a the medium.From Amityville horror the family traumatized by her new home.

It multiplies the classical tropes : crunches, imaginary friends, figures appearing in the corner of the screen, evil dolls, ghosts (including the return of the classic ghost in white sheet) to a crescendo in the last act where terror sequences are piling up like action séquences in blockbusters.

This clever script is the perfect canvas for James Wan who energizes it by his brilliant direction.
I’ve heard good things about his Insidious but I was skeptical when it was announced at the head of the next Fast & Furious.I’m not anymore after The Conjuring!

His staging is formally accomplished, beautiful work of veteran DP John Leonetti , but his main talent is his mastery of the geography of action scenes, it makes the most of the beautiful sets and never lose the viewer. Even in scenes taking place simultaneously on several levels of the house.

It maintains throughout the film a heavy atmosphere while offering spectacular terror scenes , with the help of an an higher budget than the Blumhouse productions like Insidious.

The other strength of The Conjuring lies in its cast, the actors of the film does not phone their performance under the pretext of being in a horror film. Their naturalistic acting involves us in the events of the film and enhances the impact.

Patrick Wilson (Watchmen, Insidious) and Vera Farmiga (The Departed, Esther) play the emotional bond between Warren, the paranormal investigator couple, based on love and a shared sense of purpose. Farmiga’s performance, by makingt her both strong and fragile makes us feel the weight of her gift .

The Perron family’s actors make them so sympathetic, especially the mother played by Lily Taylor , that we are particularly concerned when we guess the real intention of the evil entity that attacks her in a grueling final act .

The film still manages a few touches of humor, without losing impact.

The room where the Warrens keep their « trophies » , especially the terrifying doll Annabelle who is the subject of a pre-credits sequence leaves open a potential franchise build on the couple.
If Wan and his team remains at the helm count me in!